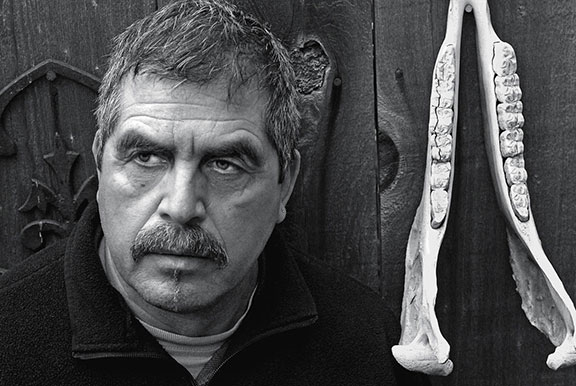 Juan R. Fuentes is a graduate of San Francisco State University. He has taught at the Mission Campus/City College SF, the California College of the Arts, Oakland CA and was visiting faculty at the San Francisco Art Institute’s print department. Juan was also director of Mission Grafica at the Mission Cultural Center for Latino Arts.

Inspired by the Chicano Movement and mentors Rupert Garcia and Malaquias Montoya, Juan has dedicated his art as a cultural activist to supporting and being part of a global movement for social change. His silkscreen posters and relief prints have addressed many issues as they relate to communities of color, social justice, racism, and international struggles for liberation.

Juan’s studio Pajaro Editions is part of Consejo Grafico Nacional, a collective of Chicano/Latino print studios. His prints and posters reside in various institutions and museums including, the Mexican Museum of San Francisco, the National Museum of American Art at the Smithsonian Institution in Washington D.C., the San Francisco Fine Arts Museum, the Library of Congress, the Center for the Study of Political Graphics in Los Angeles and CEMA, the California Ethnic and Multicultural Archives, University of Santa Barbara. CEMA has also set up a personal archive for his works. Juan’s art has been exhibited locally, nationally and internationally.

2009 Art is a Hammer Award, Center for the Study of Political Graphics